A recent CNBC article outlines how more and more cryptocurrency mining, at least outside of a pool, has become unprofitable as prices drop but the cost of mining remains high. This has caused a stagnation in hashrate as well as GPU sales for major card developers.

The article shows a historical chart outlining the average profitability of mining Ethereum: 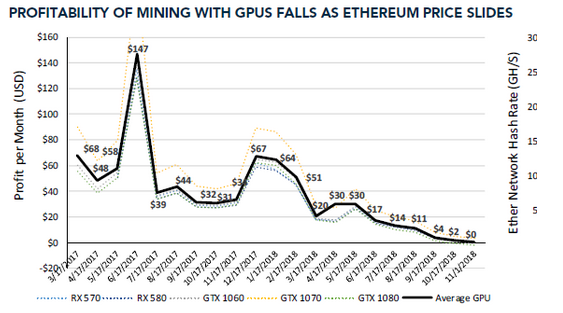 The steady drop in the market has made Ethereum mining unprofitable, however there is hope that this could lead to an eventual rally, as dropping hashrate will lead to slower production of Ether. This increased scarcity combined with the coming drop in block reward (from 2 to 3) will likely lead to a rise in price, which will then in turn cause more people to begin mining again, and so the market cycle goes.

It isn’t just Ethereum that is becoming unprofitable either. The Next Web is reporting that Japanese internet company GMO is posting losses in Q3 for its Bitcoin and Bitcoin Cash mining. Despite mining an impressive 1,590 Bitcoin and 25 Bitcoin Cash, it still couldn’t cover the cost of the electricity used for the mining.

The downturn is affecting the computing industry too. As a result of the slump, GPU developer Nvidia has taken significant losses in sales over the past year. Semiconductor analyst Christopher Rolland is quoted in the CNBC article:

“We estimate very little revenue from crypto-related GPU sales in the quarter, consistent with management’s prior commentary that they were including no contribution from crypto in their C3Q18 outlook.”

With any luck, once the first signals of a bull run start to show people will once again be firing up their GPU mining rigs. Or perhaps, GPU mining is already on its way out for more efficient algorithms. In either event, stick with Chepicap for all the latest updates!