While Bitcoin (BTC) currently steers a stable course, its mining ecosystem is going through one of the strongest bear stretches in its entire history.

New data from blockchain industry analysis provider Diar reveals that miners have not been doing very well in the last month or so, leading to questions about the effects this could have on Bitcoin’s future. Although the price of the cryptocurrency is 40% higher than it was a year ago, there are many more miners operating in the market and fighting for a block reward whose value in fiat currencies is not keeping up with this growth. Bitcoin miners may have made much more so far in 2018 than they did through all of 2017, but the increase in the price they pay to run their operations is outpacing revenue growth.

“The investment proposition for smaller miners held true throughout most of this year but has since become questionable on the back of an increase of computing power competing for the coinbase reward,” the publication wrote in its report.

Bitcoin’s hashrate has been climbing slowly but surely since the first truly dramatic rise in value in 2014. Since the beginning of 2018, a more dramatic hike than usual has occurred, and it does not follow Bitcoin’s price movements. 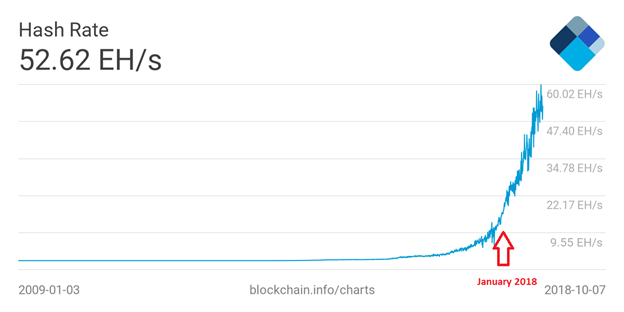 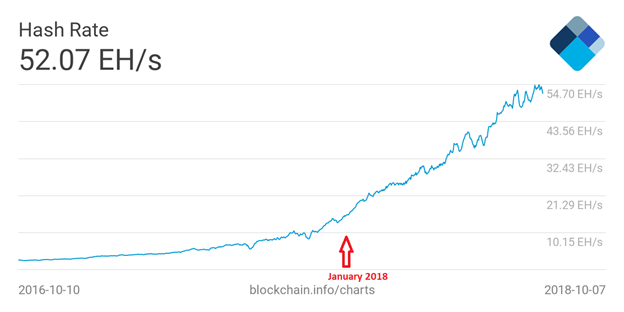 These two charts show that the present-day hashrate for Bitcoin is beginning to taper. According to Diar, this might not indicate a change in the status quo, at least not now:

“It’s unlikely […] that the recent tapering out of the hash power [will] last. With big mining operations on low electricity costs running at anywhere between 50-60% gross profit from Bitcoin revenues, the market has a lot of room left to grow and profits to squeeze.”

Implications for the future

For people trading Bitcoin and using it on a daily basis, nothing really changes. A drop in hashrate would only lead to a slight delay when processing transactions as the week progresses, and this will disappear as soon as the hashing difficulty adjusts to meet the goal of one block every ten minutes.

Wherever the hashrate goes, the difficulty follows.

Resilient as the Bitcoin system may be, a drop in mining profitability could have serious medium-term implications. Unless Bitcoin breaks out of its current price level, only large miners with plenty of experience and solid relationships with electric utility companies would have the flexibility to survive this market. Smaller mining operations would simply find themselves unable to compete.

If this trend continues, Bitcoin’s entire mining ecosystem is likely to consolidate around a couple of operators with the necessary capital to ride out storms like these. Further into the future, this effect may be amplified when the block reward halves from 12.5 to 6.25 coins in mid-2020.

Ironically, the principles that have kept Bitcoin decentralized until now may begin to centralize the network as running a node requires more storage and mining operations require more computing power and cheaper electricity than the average person can muster.

A mining pool’s share of hashrate tends to shift because of various circumstances. Just a few months ago, BTC.com had nearly one-third (29.6%) of all Bitcoin hashrate, but the figure has now dropped to 15.4%, according to the latest data from blockchain.info.

It is widely expected that when the block reward halves, there will be drastic changes in the share of mining activity by various pools and incentives to create machines that achieve the same hashrate while using less power.

Eventually, Bitcoin’s block reward will be so low that it would no longer be profitable to chase it alone. At that point, transaction fees will take over as the predominant source of income and a whole new set of incentives will be created for existing miners and those who wish to enter the market. Although Bitcoin may be more centralized at times, economic realities and changing landscapes inside the ecosystem will inevitably cause the status quo to shift from time to time. In such an environment, a miner in a great position today may not have the same advantages tomorrow.